Our next project Bus – an original Volkswagen campervan

Another new project – this is Easley, leaving the factory on 15th January 1970 as a Pearl White model 231 021 VW Camper. Of interest is the original delivery country of Belgium, which would suggest it being a US military delivery programme, where servicemen would be able to order a vehicle new and then have it transported back home, maybe after a quick tour of Europe – and why not.

A quick look around the Bus shows a lot of original features intact, and then some obvious areas requiring work. The ‘for sale’ pictures show someone got handy with the primer – probably to cover up a faded and burnt off original pearl white. This is an early Bay window with low level indicators, low level front bumper and what should be a slightly larger VW on the nose – not as large as a split screen but still big enough to leave no doubt this was a Volkswagen. 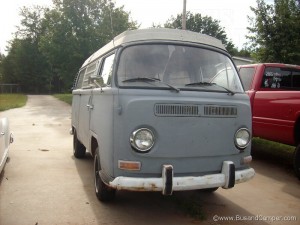 Westfalia worked closely with the Volkswagen factory to make a high quality campervan – the pop top was and still is the most recognised symbol of a VW Camper, and to achieve this VW would prepare the van with a large hole in the roof for the Westy fibreglass top. Factory build options M517 prep for Westfalia camper and M518 cut out for Westfalia roof. On the early models the top would hinge at the front and leave the back section as a luggage rack. This is a LHD model with the sliding door on the right side, it has some US only features – pretty sure the European bumpers would not have had the over-riders. 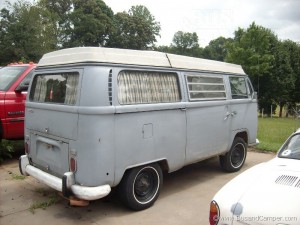 Inside you see the mustard coloured vinyl seating arrangement and fold out rock and roll Bed – lifting the bottom cushion and pulling forward collapsed that back seat to form a snug double bed. The wardrobe on the left side of this picture had a hanging rail for clothes and a mirror on the inside to check you were appropriately dressed for the day. Under the seat is a useful storage compartment – here you can sometimes find the heavy but high quality tent. Missing from this picture is the fridge unit which should be by the door just behind the passenger seat. The buddy seat, table and louvered windows are all there. 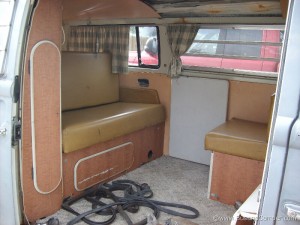 Up front is a padded dash and familiar looking sturdy seating for 2 – nearly all vans were now walk through. Just visible is the fixings for the hammock that goes up front over the seats. Enough room for a smaller child or a dog perhaps. Umbrella handle parking brake, a rare finger trigger Hurst shifter, rubber floor mats and (oh dear) a cracked windscreen by the looks of it. The basket weave cover on the drivers seat will need a new cover – but there should be enough horse hair padding left to just need a new cover. 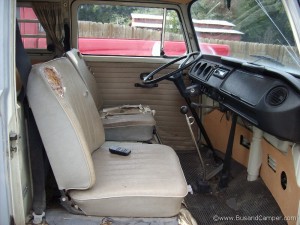 A pleasant surprise to find an original M119 Eberspacher heater in the engine bay, this would be factory fitted and very effective, burning petrol to heat the cabin via a small outlet under the rear seat. Otherwise fairly usual engine bay, it escaped being painted black but did not escape having its air cleaner thrown away in favour of a less useful aftermarket chrome gauze filter. The badge on the removable rear valence indicates a Belgium delivery. A twin port doghouse setup with some missing parts and some parts that have been added – a 009 distributor may not run very well with that carburetor for example. Missing a fresh air hose on the right is dangerous and will bleed air into the engine bay instead of cooling the cylinder heads. 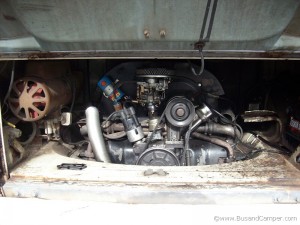 The rear hatch view showing the laundry cupboard on the right (well that’s what we use it for) and the mustard cushion that makes the rest of the bed. The spare wheel is curiously missing – a common mod was to put this on the front nose where its weight over time buckles the single skin nose that was not designed to carry the weight of a wheel. Nice to see original curtains – earlyBay style too with the yellow and green checks (ok the yellow has faded). Tools were not part of the deal.. 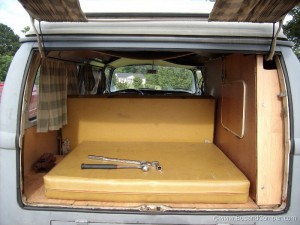 Next up is an assessment of the work required..