With the bumper off and a cut off wheel we strip away the old rusted out panels and show the typical new replacement panels we used. EarlyBay to later Bays had slight changes to the front of the Vans – early bays have low indicators, larger badge sitting on a flat panel, wider air intake and a flat non ribbed front valence. Add to this no-one makes a complete early front panel and you see why some restorations have later noses on earlier Buses.

How does the rust happen? VW did at least make the airbox drain go through the bottom of the valence, but the water trap behind the front window could be the main cause of rust here – once a pinhole is made water literally runs down the front skin of the nose and puddles inside the valence. If your Bay has rust showing underneath the window seal then look at the valence – its probably rusted out. With Easley we took the window out expecting to have to repair the bed as normal but this is actually a good window bed, needs flatting back and primer, seal and paint but its solid – one less panel to do; 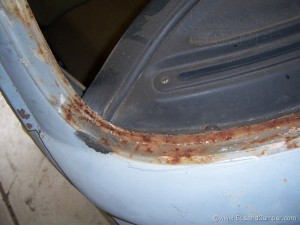 However, even a non pin holed top glass seal did not save our lower front panel – we forgot to take a picture of the cut away metal but it was typical – water or moisture gets between the panels and starts to corrode. Back to the lower valence there are several panels are his is Easley with her new Klokkerholm inner valence; 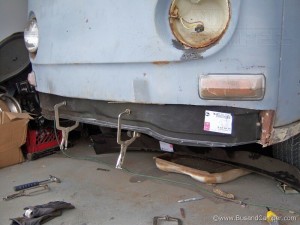 Welded and painted front inner and the drivers side dogleg cut out; 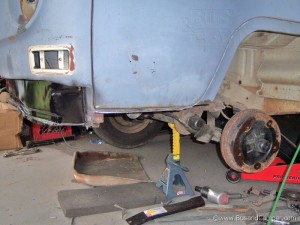 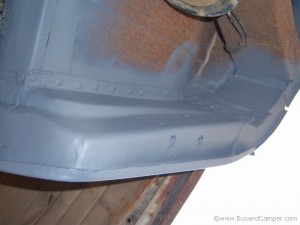 Top side view of the repair to the drivers side, the outer edge of the floor needed extending to meet the Klok repair panel, and also the bottom of the seat stand was repaired – all good now and ready for underseal paint or whatever. Good idea to add seam sealer here to stop water ingress it being a wheel arch; 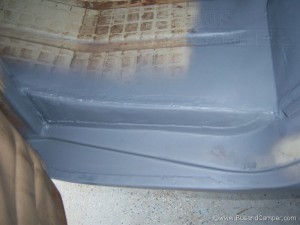 An almost identical repair carried out on the passenger side, cut away the dogleg, new panel and tidy up the edges of the floor, primer and underseal; 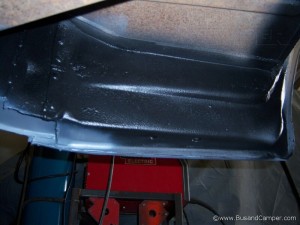