Hazet tools have always been synonymous with German auto manufacturers and Volkswagen is no exception. Here we take a look at how to date a Roundbox toolkit into 4 main date groups and then show some fantastic period ads showing how Hazet and VW worked together through the 50’s and 60’s through the medium of official Volkswagen advertising materials.

Dating a roundbox can be interesting and challenging, but there are several main changes that are quickly spotted so you can make a successful match, for example;

Bear in mind with all the tools should have the lower case ‘azet’ which will quickly date the tool as pre 1965 when the Hazet factory went to upper case HAZET branding. Have fun collecting.

In the early 1950’s Hazet started making a round shaped toolbox that would neatly clip into the spare wheel of a VW Beetle. The earliest version of the tool kit was made for 16 inch wheels and this changed to for 15 inch wheels and other VW models – such as the VW 1500 or type 3. Hazet also made their own branded version – so whilst the Volkswagen roundbox toolkit was embossed with a huge VW the Hazet item was branded as Tourist and sold outside of the VW empire.

There are approx 4 main versions of the VW toolkit, with subtle variations of the tools inside and the box itself changed linings at one point during its life – from felt to flock lining for the tools. This is an ad from a very early time of the roundbox (early as there is no Phillips screwdriver between the pliers); 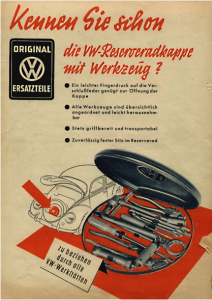 A variation of the same ad and similar 1951 period; 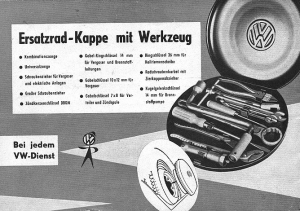 And this is a page from the 1954 VW Beetle brochure – still showing a box without Phillips screwdriver – this date is debated amongst the other dating sites but with the evidence of aan actual 1954 brochure we feel it is pretty clear that in the 1954/55 brochures VW were still offering toolboxes without the new small stubby screwdriver; 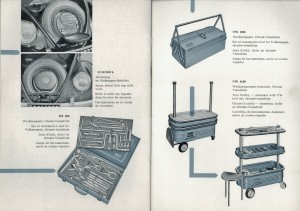 The mid to late 50’s flocking and double box era

Around 1955 Hazet introduced an 814 Phillips stubby screwdriver between the pliers. Followed quite quickly in approx 1956 / 1957 with the inside tool lining now a lighter blue spray on flocking rather than a felt pad. At the time of the flocking change they introduced a 21mm box wrench to the other end of the 36mm wrench to cope with the new smaller generator nut presumably. And finally a subtle change to the T-handle 527 – they straightened the 14mm box instead of being at an angle.;

This is updated offering as found in the 1957 brochure; 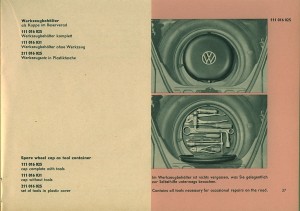 Interesting from the same period VW must have started catering for the Bus customers or those without a convenient spare tyre – here is a ‘211’ numbered tool roll from 1957, almost the same line up of tools but essentially a few short – no long screwdriver 811 or generator box wrench 561; 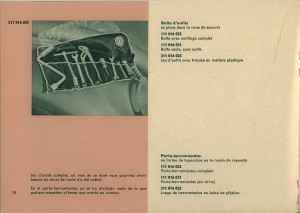 In the 1961 brochures the Box appears unchanged; 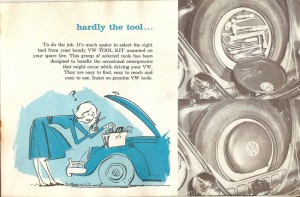 Here is an excellent example of an early 60’s version of the kit; 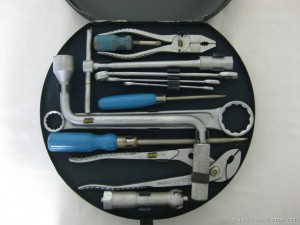 Then in approx 1962 the round box went through quite a revision – Hazet deleted the T handle spark plug wrench 527 or 2527, possibly changed the lug wrench to be the plastic handle 772 with hubcap puller in the handle, possibly updated the large screwdriver from a 811-6 to a 811-9 with a more detailed and textured blade and finally the big change around about this time the kit gained another wrench or spanner – making a total of 4 spanners in the kit; 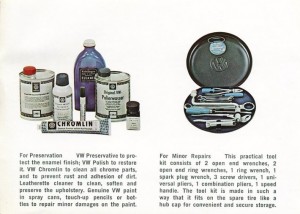 Things remained largely unchanged although the toolkit advertisment was getting progressively smaller, here is the 1965 brochure; 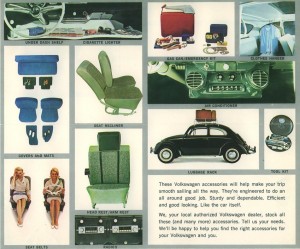 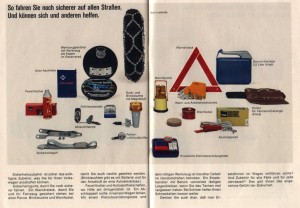 And finally this is a picture of that 1966/67 Toolkit in superb condition; 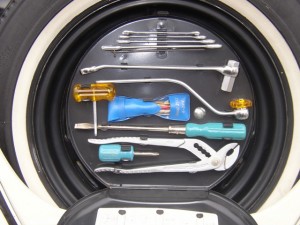