From Grants NM past Albuquerque and into Amarillo Texas

We weren’t that enamoured with the KOA in Grants – there seemed to be an atmosphere of using this site as a stop over on your way somewhere else. Leaving Grants, a former Uranium mining town, we set off for the Rio Grande and Albuquerque – the largest city in New Mexico.

Being English a cup of tea in the morning is necessary before anything else, the sunrise in the background shining through the fence. Setting off we noticed a a few towns that were not typically American style or layout. Pictured is the very pretty town of Laguna with its big white painted church on the higher ground and a series of small white painted block looking dwellings – would not have guessed we were in the US. The typical high terrain flat tops started to disappear and be replaced with more open expanse, a picture looking back to see more traffic than we’re used to in the previosu 3 days. 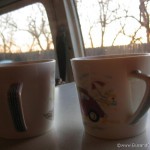 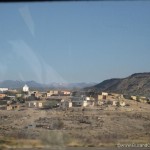 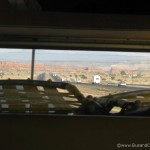 As we come into Albuquerque we see more Americana – great advertising boards lining the side of the road, sign posts for Wagon Wheel are entertaining as is Montoya and Las Vegas – but this was the NM version and not the NV one we started at. One staggering thing about the US was the open roads – how straight they are and the shear emptiness of the countryside – this is a HUGE country. Mile after mile of just the same road. Some lunch and an afternoon nap quickly alerted us to the presence of fumes in the cabin area, so a roadside stop for a toilet break and a crawl underneath the van shows us the heater vent tubes are open to the underside, maybe this was an entry point for the exhuast fumes – so we taped them off thinking we’ve fixed it. Right. 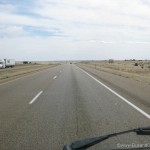 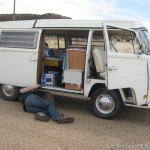 Crossing the state border into Texas means we’re getting through our journey for the day – the target was the KOA in a place called Amarillo. Past some more interesting town names like Adrian and we were suddenly aware of green – lots of green fields with crops growing in them, and great silos for corn drying and delivery. This is like a slow motion transformation of the countryside – from bleak scorched Arizona to more colourful green and populous. We also spot for the first time cattle – and lots of them in great numbers in fields dotted around. We must be in Texas – all we need now are some real cowboys. Pulling into the KOA we chose an RV spot this time for like $6 more a night and this meant we had a space around us, and a nice view of a Bay window bus in the neighbours lot. 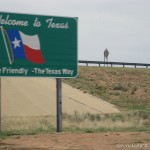 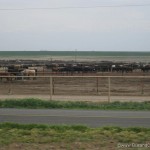 Parked up at the KOA near the airport in north Amarillo we wanted to try traditional steak meal and there was nowhere better than the world famous the Big Texan Steak Ranch. A free limo ride to the restaurant and wow what a presentation – that iconic and much photographed Big Texan sign, huge Bull on a trailer, a theme motel and that super cool 20ft Cowboy boot. Apparently if you can eat the 72oz steak you wont have to pay for it. 72oz is a very large bit of steak and few succeed the challenge – we chose sensible portions. This is true cowboy country as epitomised by the super large advert for Wrangler jeans looking over the car park – a fantastic cowboy dress code suggestion for the whole family. This is wild west and a great stop off – a recommended place to visit. Finally after our massive meal, red wine, being serenaded we took time out to update the blog and work out where next on this journey. This was a day to remember – going from barren empty land to green fields of cattle and burgeoning civilisation. 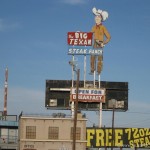 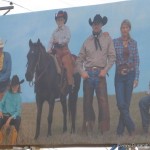 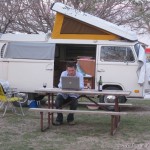