Roadkill cafe, a broken down Campervan and a wonder of the world

One of the wonders of the world – The Grand Canyon. Difficult to describe the shear size or scale of this land formation – you have to see it to believe it. breathtaking.

The previous day we arrived at an RV park with a poor running engine and a ty-rap repaired distributor points. Not to be be beaten there was at least civilisation in Seligman, Roadkill Cafe and one of those garages with an outside 4 post lift. Must be dry here a lot – but snce we’re on the edge of the desert this is no surprise. This is the view, 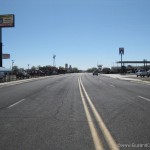 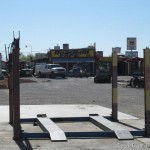 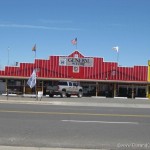 The local garage eventually opened but they only had ‘domestic’ parts, we looked out back in their storeroom (a real treasure trove), went through some parts books but no luck – ‘gonna be expensive that’. During breakfast we remembered hearing a VW driving past earlier, and asking around we left a message for the owners girlfriend who worked in the diner across the road – she was due to start work at 10 and was always dropped off by the VW guy. As luck would have it he had a spare of the exact part we needed, a used spare but none the less working. In 2 minutes we were up and running again. So thank you ‘VW guy’ and your single cab utility VW; 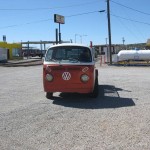 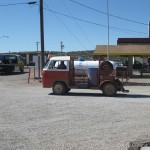 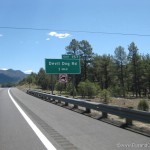 Behind schedule we cut out the trip to the meeor craters but kept our promise to go see the Grand Canyon. Its a fair climb to the top, the Bus was definitely down on power but we held our nerve and kept to a steady 50 mph on the flat but could only manage 2nd gear and 20mph at the steep points. I dont think the American behind us appreciated the gentle pace – not in their big V8’s anyway. Once through the park entrance there was a confusing choice of viewing points, but trust us when we say the first time you see the Grand Canyon in person it will take your breath away. Here we arrive and have our picture taken 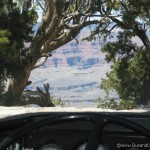 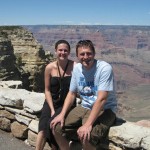 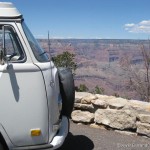 There were so many observation points and scenic routes along the southern edge of the natural beauty. Along E Rim Drive, each viewing area bustling with people and vehicles, not one VW Camper though – although I bet 20 years ago there were nothing but Westfalias driving through the area. Wonderful scenery; 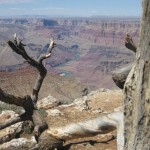 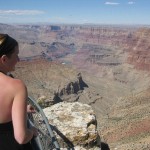 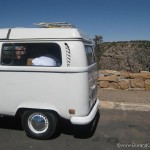 The run down the mountain was a lot easier and faster too – we managed 60mph at one point. Wow. Stopping off at an Indian Trading Post we bought some very useful Blankets (it was actually cold up here in April, and a Dream Catcher that soon went on the rear view mirror. The run down to Flagstaff was a lot easier than climbing uphill all the time. It was here that we discovered Kampgrounds of America (KOA) and how well maintained and to a good standard they are, hot showers, and good washrooms, we enjoyed a good meal and conversation with our neighbours. 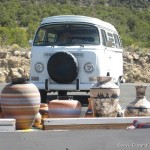 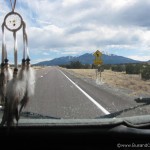 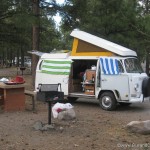